Backstreet Boys have added another leg to their huge DNA Tour, and they'll be performing at iTHINK Financial Amphitheatre on Wednesday 22nd June 2022 (Rescheduled from Wednesday 23rd June 2021)! The teen heartthrobs turned adult contemporary pop stars will be performing a non-stop hit-fest, as they thrill fans with an all-singing, all-dancing stage show that features a wide variety of songs from their career as the best-selling boy band of all time, including tracks from the tour's namesake, last year's smash hit album DNA! With huge stage production, slick choreo and all the charm and charisma you've come to expect from the five-piece, this show is guaranteed to be Larger Than Life! 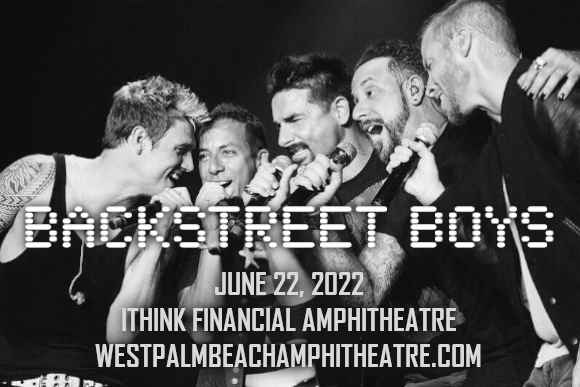 In the late-1990s and early-2000s, pop music was king and the Backstreet Boys were themselves pop royalty. The world's biggest boy band of all time, with over 100 million albums worldwide, the group formed in 1993 and became household names with their self-titled 1997 US debut album, which was certified 14-times platinum by the RIAA. This was just the beginning for the band, who went on to hit the top 10 of the Billboard 200 with their first 10 consecutive albums – something that had not been achieved since Led Zeppelin, and had never been done by a boyband before. In 2003, after 10 years of performing and recording together, the band embarked upon a two-year hiatus and returned to music with their 2005 comeback album Never Gone. Having founded the band alongside fellow members AJ McLean, Howie Dorough, Nick Carter, and Brian Littrell, Kevin Richardson left the group in 2007 to pursue personal projects but returned to the band permanently in 2012. The following year marked the band's 20th anniversary, and also saw the group honored with a star on the Hollywood Walk of Fame. Their most recent album is 2019's DNA.