One of the hottest and best-selling artists in the US behind a slew of global smash hits, Chris Brown, is back to take over on a co-headlining tour with one of hip-hop's hottest mainstream rappers, Lil Baby. Hip-hop and R&B's hottest boys are uniting at "One of Them Ones Tour", serving a night at iTHINK Financial Amphitheatre on Friday, 12th of August 2022. Chris Brown's global smash hits include "With You", "Turn Up the Music", and "Kiss Kiss" featuring T-Pain, while Lil Baby's hit tracks with sick bars include "Yes Indeed" with Drake, "Woah", and "Drip Too Hard" with Gunna. Don't miss out on Chris Brown and Lil Baby joining forces at the "One of Them Ones Tour". Book your tickets now! 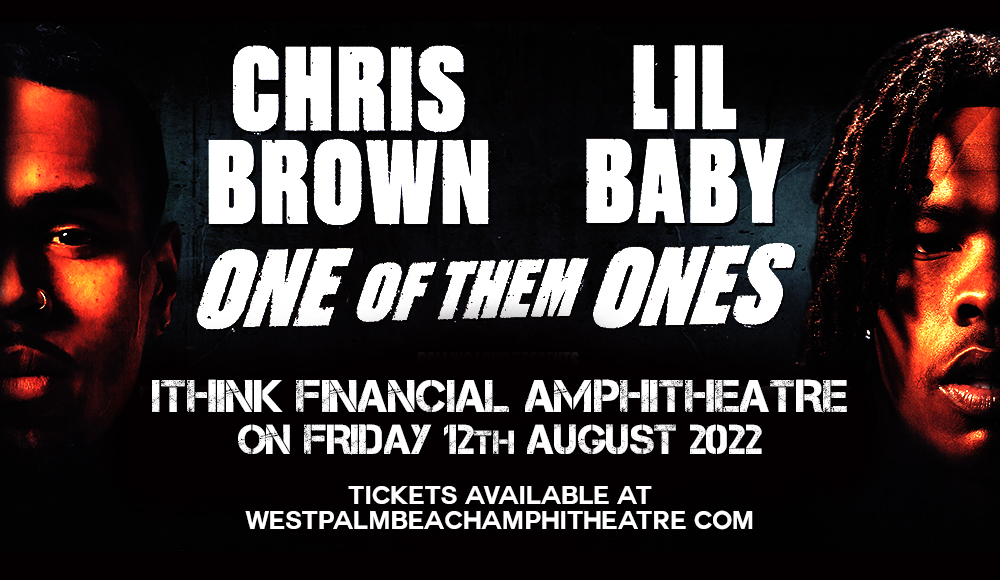 One of America's hottest male singers since 2005, Chris Brown, and one of hip-hop's newest contenders rising in 2017, Lil Baby, are teaming up to serve fans a brand-new tour where hip-hop and R&B converge. Thus, they present you the "One of Them Ones Tour".

“You Got CB &. Wham On The Same Tour!! Summer Bout To Be Crazyyy!! … See Ya Soon @chrisbrownofficial" wrote Lil Baby as he shared the news about the co-headlining tour on Instagram.

Though this isn't the first time fans are seeing the two together. They both featured in Tory Lanez's 2018 song "Flexible".

Since 2005, Chris Brown has dominated the mainstream R&B scene with his debut single "Run It" taking the #1 spot on the Hot 100. From then on, Brown continued to drop hits after hits over the next two decades with tracks like "With You", "Forever", "Look at Me Now" featuring Lil Wayne and Busta Rhymes, "Don't Wake Me Up", "Go Crazy" with Young Thug, and "No Guidance" featuring Drake.

Lil Baby has made huge waves in recent years, emerging in 2017 with the release of "Perfect Timing" – his first mixtape. He dropped his debut album "Harder Than Ever" in 2018 which features its RIAA 7x Platinum-certified hit single "Yes Indeed" with Drake. His 2018 mixtape "Drip Harder" produced two mega-hit singles "Drip Too Hard" with Gunna earning a 9x Platinum certification, and "Close Friends" earning a 5x Platinum certification from the RIAA. More of his hits include "Woah", "Sum 2 Prove", and "Do We Have a Problem?" with Nicki Minaj.

At the "One of Them Ones Tour", you've got two hitmakers from the R&B and hip-hop scene joining forces in one night to deliver a bang. Fans are in for the two artists' biggest hits and even bigger surprises live on stage. Catch Chris Brown and Lil Baby live at iTHINK Financial Amphitheatre on Friday, 12th of August 2022 by grabbing your tickets now!