When Dave Matthews Band takes to the stage, you know you're in for the show of the summer! A veteran act of the touring circuit, the band has made its name through captivating live concerts that showcase the immense skill of each of its musicians, the love they all have for performing, and the imaginative ways they breathe new life into every song and setlist! The chart-topping, Grammy Award-winning group comes to iTHINK Financial Amphitheatre on Saturday 31st July 2021, performing a variety of tracks from its hit-filled back catalogue! 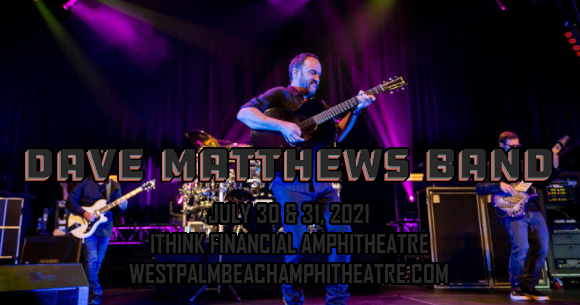 There are few bands in American music history that have reached the consistent levels of success that Dave Matthews Band has. The group, which was formed in Charlottesville, Virginia in 1991, had its breakthrough three years later with its debut album Under the Table and Dreaming, which went six-times platinum. Though many bands encounter the trope of the “difficult second album”, this was not the case for the band, who won a Grammy Award for the song "So Much to Say" from its second studio album Crash (1996), which went seven-times platinum. The band also achieved a record-setting seven consecutive number-one albums on the Billboard 200. Not only has the band found huge commercial and critical success with its albums, but it has gained a reputation for its lively and inventive concert tours, selling over 100 million concert tickets to date, and releasing a prolific 38 live albums throughout its career, which has helped build a fanbase to rival fellow festival legends the Grateful Dead.