Two hard-hitting bands will come crashing and smashing at the Coral Sky Amphitheatre on Tuesday 1st October 2019. Godsmack & Halestorm will be double-headlining this concert tour, taking them to several other key cities and states around the country. You can't call yourself a rock and heavy metal fan if you fail to catch this gig. Not one, but two! That in itself is a rock solid treat for headbangers. Have a ball! Get those tickets now! 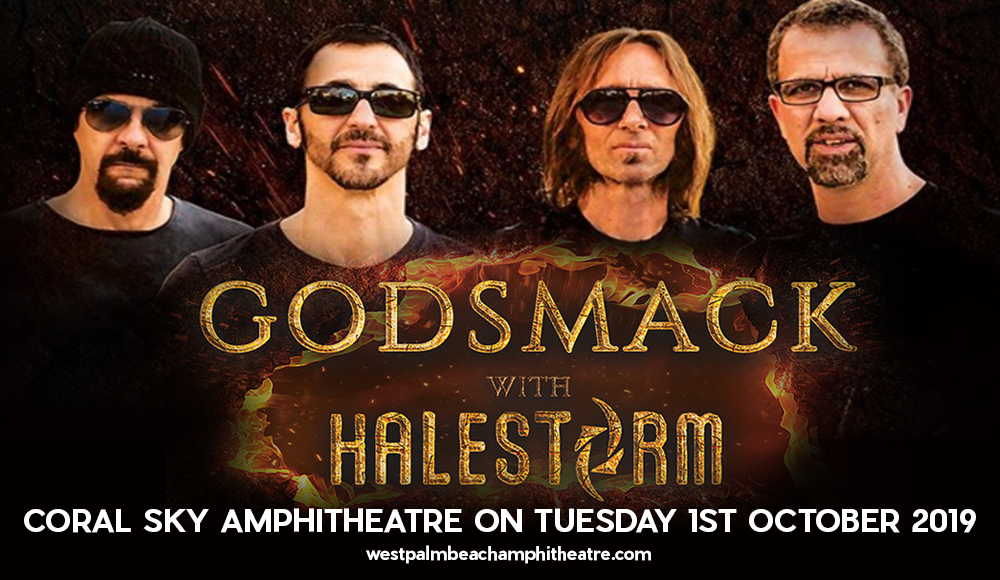 Rocking since 1995, Godsmack has definitely put another feather in the cap of the city of Boston, as Mayor Marty Walsh himself declared August 6 as "Godsmack Day" in the city of Boston. Founded by frontman and songwriter Sully Erna, guitarist Tony Rombola, bassist Robbie Merrill, and drummer Shannon Larkin complete the band's line-up. Godsmack has churned out three consecutive number-one albums on the Billboard 200, namely Faceless, IV, and The Oracle. The band also has lorded over the airwaves with 25 top ten rock radio hits, including 18 songs in the top five. They are a regular presence at Ozzfest and other major live rock music festivals.

Since debuting in 2009, Halestorm are still blowing strong with their vicious brand of heavy rock-metal music. Fronted by vocalist and guitarist Lzzy Hale, with her brother drummer and percussionist Arejay Hale, guitarist Joe Hottinger, and bassist Josh Smith, Halestorm proved they are a force to reckon with as the single "Love Bites (So Do I)" won the Grammy Award for Best Hard Rock/Metal Performance on February 10, 2013. Their third album, Into the Wild Life (2015), peaked at number five on the Billboard 200, while their fourth album, Vicious (2018), debuted at number eight on the chart, becoming their second top 10 record. Halestorm is known for their tireless touring schedule of doing 250 shows a year, and is consistently visible in several heavy metal music fests.

“This tour leg is going to be KICK ASS, no doubt!” Godsmack noted in a tweet. “We can’t wait.” Don't wait 'til the last minute to get tickets, book them now!