One of the biggest stars in country music, Jason Aldean has a winning combination of charisma, stage presence, hit songs and unbelieveable stage production, making him a must-see live act that sells out year-upon-year! This summer, he's bring his We Back Tour to Coral Sky Amphitheatre on Saturday 12th September 2020, and the crowd-pleasing artist will be performing tracks from his most recent album, 9! He'll also be joined for the night by country pop singer-songwriter Brett Young, "Drunk Me" singer Michael Tenpenny and Dee Jay Silver in support! 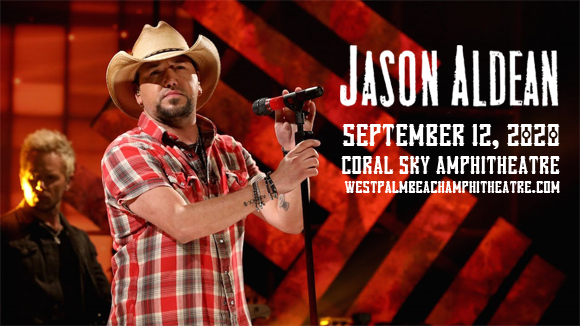 Having spent nearly 10 years chasing his dream of being a musician, Jason Aldean was only six months away from giving up when he finally got his big break. The singer and songwriter had moved to Nashville in 1998, after several years of performing in and around Georgia, to sign with Warner-Chappell. However, the contract never bore any fruit, and was followed by a string of disappointments, including another failed contract, this time with Capitol Records Nashville. Frustrated, he decided that if he hadn't made it within half a year, he would return to Georgia and walk a different path. Five weeks later, the universe brought him a deal with Broken Bow Records, with whom he released his self-titled debut album in 2005. Since then, he's released nine albums and 24 singles with the label, with seven of those albums getting platinum or multi-platinum sales, and 21 of his singles reaching number one. Aldean's latest album, 9, was released in 2019.