Even after decades on the road, country music superstar Kenny Chesney still loves every minute of performing live, and it's clear to see from the moment he takes to the stage! The "There Goes My Life" singer comes to iTHINK Financial Amphitheatre on Thursday 7th May 2020 as part of his 2020 Chillaxification Tour, which will be hitting up cities all over the US with a diverse and exciting bunch of support acts, including acts including Old Dominion, Florida Georgia Line, and Michael Franti & Spearhead!

“I love playing for No Shoes Nation any time, anywhere,” adds Kenny, “but these stadium shows are always something so powerful, I can’t tell you how much anticipation goes into each one. Not to mention, we’re always wanting to top what’s come before—and I think this lineup might just pack the most fun of them all.” 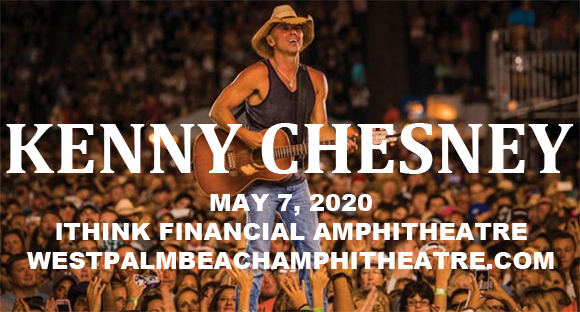 A country music megastar, Kenny Chesney is one of the best-selling acts that the genre has ever known. The artist began his career with his 1994 debut release In My Wildest Dreams, and steadily grew in popularity over the next few years, winning the ACM Award for New Male Vocalist of the Year in 1997. To date, Chesney has released 18 studio albums, 14 of which have been certified gold or higher by the RIAA, including No Shoes, No Shirt, No Problems (2002), When the Sun Goes Down (2004), and his first Greatest Hits compilation, which have each been certified quadruple-platinum. A prolific songwriter, he has released 63 singles, and all but four have charted in the Top 40 on the US Billboard Hot Country Songs and Country Airplay chart, including 30 that have reached number one. In addition, 26 of his singles have charted in the top 40 of the Billboard Hot 100, making him one of country's biggest crossover acts. He has won Entertainer of the Year four years in a row from both the Country Music Association and the Academy of Country Music.