Have you been missing crazy, crazy, crazy nights watching live music? Well, get ready for one of the craziest of your life as world-famous rock band Kiss returns to the stage for a farewell tour like no other! The seminal band comes to iTHINK Financial Amphitheatre on Friday 5th November 2021 (Rescheduled from Friday 8th October 2021) as part of the final leg of their delayed End of the World Tour, and they are ready to go out with a bang!

“Time marched on but we couldn’t,” the band said in a statement. “Now, the boots are on and we’re hauling an extra year’s worth of pyro, lights, and spectacle. We are back! We’re pumped and can’t wait to celebrate with our biggest, wildest, and hottest show ever.” 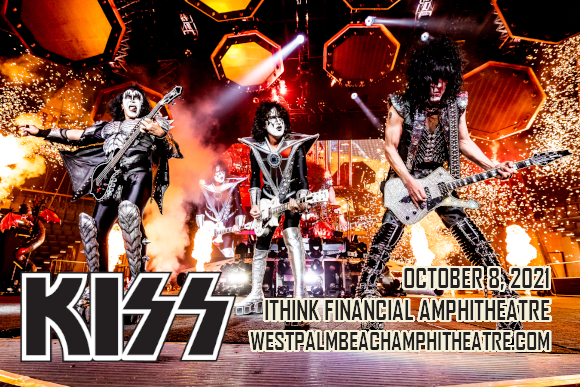 Leaving an indelible mark on the music industry, rock band Kiss are nothing short of iconic. The group came together in New York City in 1973 and had their breakthrough with 1975’s album Alive!, which brought them their first top-40 single – the first of many for the outfit. Kiss offered a unique take on rock music and with their distinctive stage makeup, larger-than-life costumes, and wild stage shows, they soon became some of the world’s biggest rock stars. Best-know for their classic line-up of Paul Stanley, Gene Simmons, Peter Criss, and Ace Frehley, the band underwent several changes of line-up throughout the 1980s and ‘90s, and for a time even discarded their signature makeup. In 1996, the band’s original members reunited and they returned to their makeup and trademark stage looks once more. Kiss is one of the world’s best-selling acts in the history of popular music, having charted 30 gold and 14 platinum albums, including three that have been certified multi-platinum. In 1999 they were inducted into the Hollywood Walk of Fame and they made it into the Rock and Roll Hall of Fame in 2014.