Lady Antebellum is one of America's top country acts, and the seven-time grammy Award-winning trio's live shows are nothing short of breathtaking! This past year, they've been honing their showmanship skills in Las Vegas on the Our Kind of Vegas residency, but this summer they take the show on the road once more, coming to Coral Sky Amphitheatre on Sunday 2nd August 2020 on the Ocean Tour! Expect a selection of songs from their 2019 album of the same name, plus a bunch of classic Lady Antebellum hits! Their special guest support acts for the evening will be "Barefoot Blue Jean Night" singer Jake Owen, and country duo Maddie & Tae! 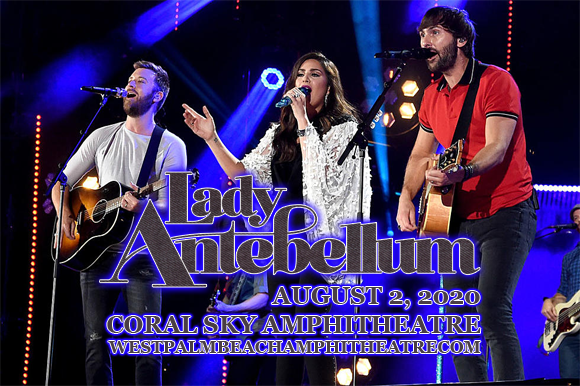 Named by Billboard as “one of country’s top groups for over a decade”, Lady Antebellum was formed in Nashville in 2006 and consists of Hillary Scott (lead and background vocals), Charles Kelley (lead and background vocals, guitar), and Dave Haywood(background vocals, guitar, piano, mandolin). After featuring as vocalists on the 2007 single "Never Alone" by Jim Brickman, which peaked at number 14 on the Adult Contemporary Chart, they were signed to Capitol Nashville. Their eponymous debut album was released the following year and was an instant hit – critically acclaimed and commercially successful, it reached number four on the Billboard Hot 100 and debuted at number one on the Billboard Top Country Albums chart, making it the first album by a new duo or group to do so. To date, the group has released eight studio albums, with six of them certified gold, platinum or multi-platinum by the RIAA. They have also won a total of 51 awards throughout their career, including nine American Country Awards, eight ACM Awards, and seven Grammy Awards. Ocean, their latest album, was released in 2019.