Country fans, listen up!! One of the biggest stars in the genre, Luke Bryan, is headed out on the Sunset Repeat tour, and he’s accompanied this time by Cole Swindell and Jon Langston!! They’re headed to the Coral Sky Amphitheatre on Saturday 3rd August 2019 – don’t miss it!! Tickets are on sale now and selling out FAST – get ‘em while you still have the chance!! 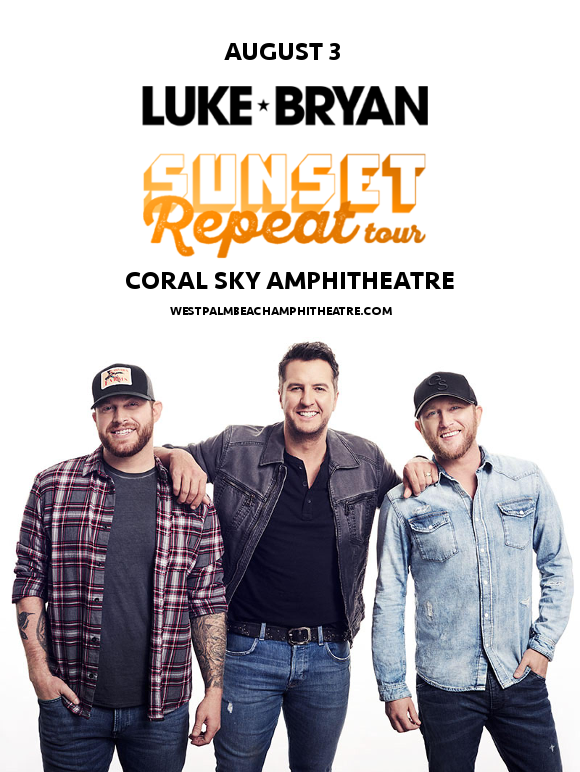 Luke Bryan is hitting the road with his most recent album, 2017’s “What Makes You Country,” his 6th. The name of the tour is taken from a lyric from his hit song; “Sunrise, Sunburn, Sunset,” from the same album, which also featured the singles “Light It Up,” and “Most People Are Good.” Over the years, Luke Bryan has taken a fair few hits from country purists for his modern take on the genre, which incorporates elements from other contemporary genres such as hip-hop and pop, with a focus on good times and the good life. The album’s title is a nod to his haters, one that reminds us that he is one of country’s best-selling stars, and the album’s contents shows us why. “Bryan has zero interest in fixing what ain't broke,” wrote Variety in a review. “It’s a 15-song guidebook to What Makes Him Successful, filled with good-time drinking, better-time sex, a little bit of family, and no particular sadness that can't be cured as soon as a certain ex-girlfriend texts back.”

Get ready to experience those feel-good vibes live with your favorite country star! What are you waiting for?? Grab those tickets while they last!!