The album that launched an astounding seven radio singles, including top 20 classics like "Photograph," "Rockstar," "Far Away," "If Everyone Cared," and "Savin' Me," Nickelback's chart-topping, diamond-certified record All the Right Reasons turns 15 this year and the band is celebrating with a special tour! Coming to iTHINK Financial Amphitheatre on Saturday 15th August 2020, the Canadian rockstars will present a very special set that sees them perform the album in full! The band will also be joined by special guest support acts Stone Temple Pilots & Switchfoot! 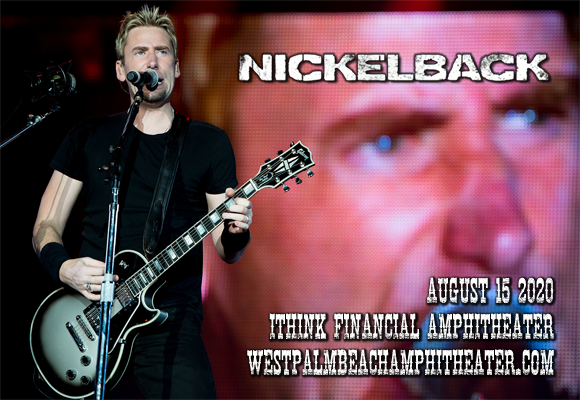 One of Canada's most successful music acts, Nickelback is the second best-selling foreign act of the 2000s in the US (behind The Beatles) and the eleventh best-selling music act of the decade overall, having sold over 50 million albums worldwide. Having formed in Hanna, Alberta in 1995, the band caught the attention of Roadrunner Records in 1999 with the release of its independent second album, The State. They were signed to the label that year and found moderate success when they re-released the album with the label in 2000. Things changed for the group in 2001 when they released Silver Side Up, which was a global smash hit. The album reached number one in several countries including Canada, Austria, Ireland, New Zealand, and the United Kingdom, and it was certified eight-times platinum in Canada, six-times platinum in the US, and three-times platinum in the UK. It launched several singles that put the band on the map, including the smash-hit lead single "How You Remind Me," which has been ranked by Billboard as the best-selling rock song of the 2000s and the fourth best-selling song of that decade overall. Out of the nine studio albums Nickelback has released since its inception, seven have reached number one on the Billboard 200, with six of them gaining platinum or multi-platinum certification from the RIAA, including 2005's All the Right Reasons which was certified diamond. In 2017, Nickelback released its most recent album, Feed the Machine.