Sadly stepping away from a career in the music industry that spans over five decades, classic rock star Peter Frampton embarks on Peter Frampton Finale — The Farewell Tour, which comes to Coral Sky Amphitheatre on Friday 6th September 2019! The renowned artist, who recently revealed his diagnosis with I.B.M. – a degenerative muscle disease – plans to use the tour as a triumphant swan song, performing all his beloved hits for fans one last, unforgettable time! 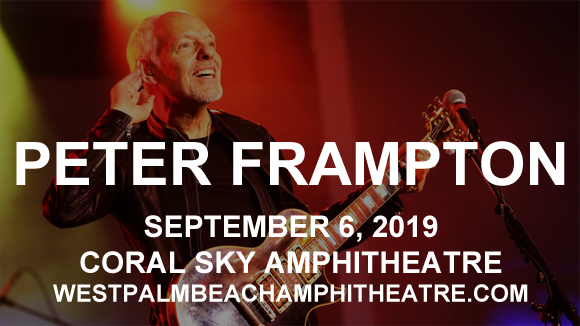 One of classic rock's most prestigious stars, Peter Frampton began his career in the 1960s as a child singer, before moving on to teen heartthrob status in 1966 as the frontman of psychedelic rock band The Herd. In 1969, the British-American singer, songwriter, producer, and guitarist Humble Pie with Steve Marriott of Small Faces, and during his time with the band he released four studio albums and one live album. Frampton left the group to pursue a career as a solo artist in 1972, releasing his debut solo album, Winds of Change, that year. His solo breakthrough came with the release of his 1976 live album, Frampton Comes Alive!, which launched three hit singles and sold eight million copies. To date, the prolific Frampton has released twenty solo albums, his most recent being 2016's Acoustic Classics.