This summer, there comes a once-in-a-lifetime opportunity to see two truly legendary bands come together for an unforgettable, landmark co-headliner tour! Latin rock giants Santana & innovative R&B icons Earth, Wind and Fire have joined forces for the Miraculous Supernatural Tour, which comes to iTHINK Financial Amphitheatre on Friday 26th August 2022 (Rescheduled from Friday 27th August 2021)! The two ground-breaking, Grammy Award-winning groups are known for their immense musical legacy and the opportunity to see them perform together is something truly exceptional! 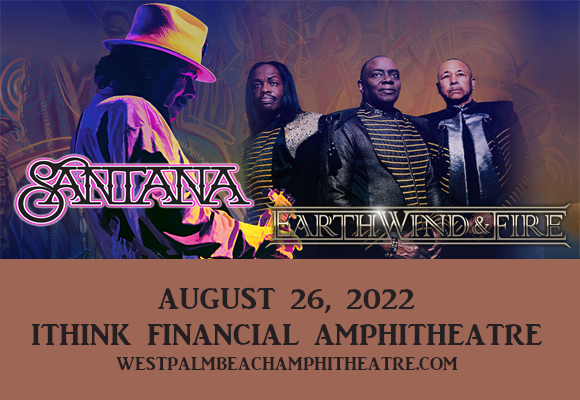 Over the past 50 years, Santana has made its name as the world's most successful Latin rock band, popularizing the genre and create a unique, instantly identifiable sound thanks to the legendary guitar skills of bandleader and Mexican-American guitarist Carlos Sanatana. The group came to fame with a highly acclaimed set at Woodstock festival in 1969, and when the band released its double-platinum self-titled debut album a few months later it found worldwide commercial success. Over the years, Santana has released an astounding 17 albums that have been certified either gold, platinum or multi-platinum in the US. In the early 1990s, the band took a nine-year hiatus from recording and found even greater fame with its comeback album, Supernatural (1999), which peaked at number one around the world and went 15-times platinum in the US, selling over 27 million copies worldwide. Supernatural won the band nine Grammy Awards and three Latin Grammy Awards and launched two Billboard Hot 100 number-one singles ("Smooth", "Maria Maria"). The group was inducted into the Rock and Roll Hall of Fame in 1998. Santana's 25th and most recent studio album, Africa Speaks, was released in 2019.