Celebrating five years in the music industry, The Doobie Brothers are heading out on an extensive tour that comes to Coral Sky Amphitheatre on Thursday 21st July 2022 (Rescheduled from Thursday 2nd June 2022) (Rescheduled from Saturday 17th July 2021)! Not only that, but the band is reuniting with their former vocalist, Michael McDonald, who sang with the band from 1975 – 1982, fronting hits such as "What a Fool Believes"! This is a real treat for anyone who loves The Doobie Brothers' incredible back catalog, and anyone who wants to see new music from this amazing and enduring band! 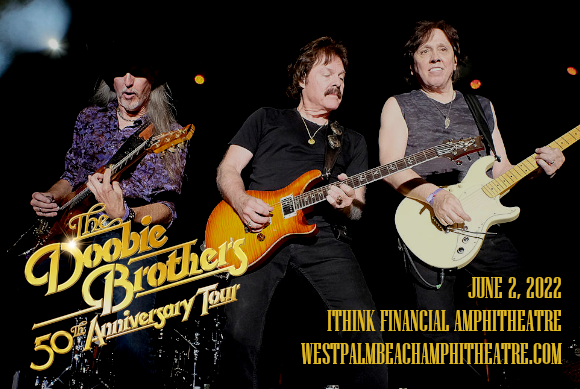 For the last five decades, The Doobie Brothers have a mainstay of rock and roll, with a bevy of radio hits, including "Listen to the Music," "Black Water," "China Grove," "What a Fool Believes" and "Long Train Runnin'," and nine gold and platinum albums in the US. When the band began in 1970, the had a traditional rock sound, with some folk, country and R&B influences, and they were fronted by lead singer Tom Johnston. When Johnston left the band five years later, Michael McDonald stepped in, who brought with him a taste of blue-eyed soul. The group disbanded in 1982, and when they reunited five years later, Johnston, once again, took the lead. Ever since, they have toured and recorded together as a band, with McDonald stepping in to join them every so often as well. The Doobies Brothers were inducted into the Vocal Group Hall of Fame in 2004, and they were nominees for induction into Rock and Roll Hall of Fame in 2020.