Why Don't We [CANCELLED] Tickets

Why Don't We is back to bring a good time at iTHINK Financial Amphitheatre on Saturday, 30th of July 2022, aboard The Good Times Only Tour. Catch the heartthrobs sing you those 'eight letters that made fans across the globe instantly fall in love. Bandmembers Jack Avery, Corbyn Besson, Zach Herron, Jonah Marais, and Daniel Seavey are set to sing and perform their biggest hits like "8 Letters" and "What Am I", and live renditions of tracks off of their latest album "The Good Times and the Bad Ones". It's your chance to scream those 'eight letters to the boys themselves at The Good Times Only Tour. Book your tickets now! 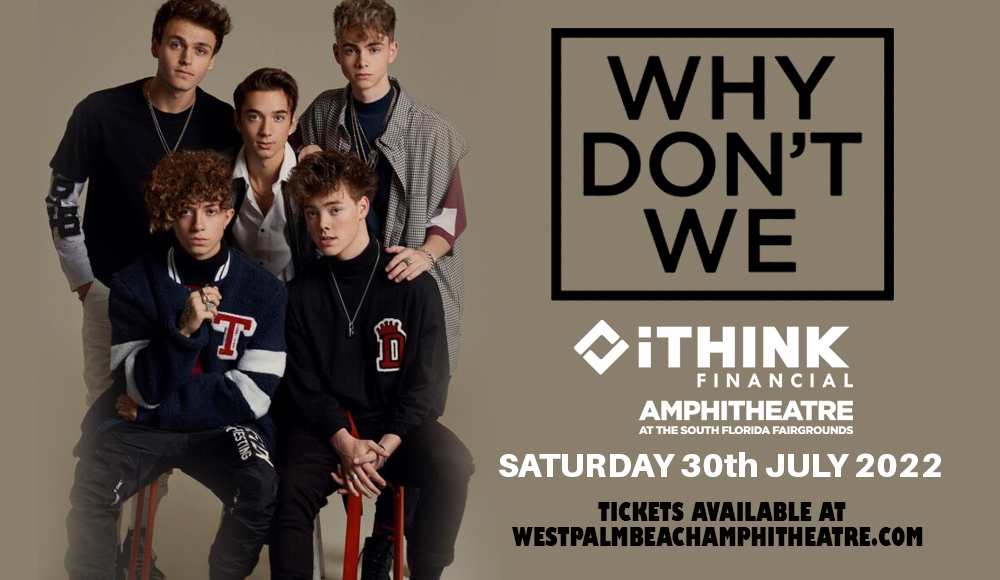 As the boyband behind 'eight letters that seem to be so hard to say, Why Don't We just dropped their newest song, "Let Me Down Easy (Lie)". About the track, Jonah Marais says – "Let Me Down Easy (Lie) is a real, open, and honest song about being in a relationship and feeling your significant other start to lose feelings. It’s asking them to 'let me down easy' instead of being too harsh. It's one of those songs that has sad undertones, but because it’s talking about the human experience and is relatable, it overall leaves you in a good mood."

The boys greeted 2019 with "Big Plans" – the first of their roster of singles throughout the year including "Unbelievable", "I Don't Belong in This Club" with Macklemore, and "What Am I".

After a nine-month break, the big plan was finally revealed as they dropped "Fallin' (Adrenaline)", the lead single from their 2021 album "The Good Times and the Bad Ones". From their first EP back in 2016 named "Only the Beginning", the boys unveiled 'big plans, and made their way to hitting #3 the Billboard 200 with their latest album.

Why Don't We promises 'good times only at The Good Times Only Tour in support of their newest record. You can expect the boys to sing their biggest hits, fan favorites, and fresh new singles like "Don't Wake Me Up" with Jonas Blue and "Let Me Down Easy (Lie)" live on stage. Book your tickets now!