With explosive, full-on performances that pull no punches and heavy hits that have stormed the charts, Breaking Benjamin has become one of the mightiest hard-rock bands of the modern era! Benjamin Burnley and co will be bringing their latest tour to iTHINK Financial Amphitheatre on Friday 21st August 2020 for a night of unrestrained, uncompromising, belters! Performing classic Breaking Benjamin tracks both in their original form and the alternate versions from last years incredible album, Aurora! The Pennsylvania five-piece will be joined by a dream support line-up, with Bush, Theory of a Deadman, Saint Asonia, and Cory Marks also performing sets! 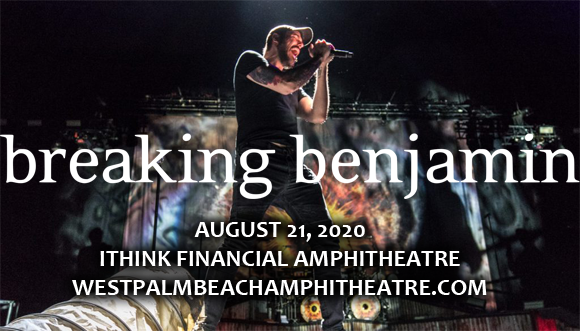 An unstoppable force of hard rock, Breaking Benjamin began in 1999 in Wilkes-Barre, Pennsylvania by lead singer and principal songwriter Benjamin Burnley who has remained the group's driving force through a variety of changes in line-up throughout its history. In 2002, the group launched its debut album, Saturate, which produced three singles – "Polyamorous", "Skin", and "Medicate" – and hit number two on the Billboard Heatseekers Chart. Since then, three of the albums the band has released have reached number one on the US Rock Albums Chart, and a further three have topped the US Alternative Albums Chart. The group's 2015 release (and first album to follow a five-year hiatus) was their first to reach the top spot on the Billboard 200. To date, Breaking Benjamin has achieved three platinum-certified and two gold-certified albums, as well as realeasing two multi-platinum, two platinum, and five gold-certified singles. Aurora (2019), the band's most recent album, features genre-bent reimaginings of their previous hits.