Named by Forbes as "2020's Most Ambitious Metal Tour", Megadeth and Lamb of God bring their colossal joint force to iTHINK Financial Amphitheatre on Saturday 14th August 2021 for a mindblowing show that will rock your very soul! The behemoth bands are two of the biggest names in metal, and this summer comes an opportunity to see them both headline the same killer event! Not only that, but the Goliath headliners will be joined by a truly epic support line-up with Trivium and In Flames opening!!! 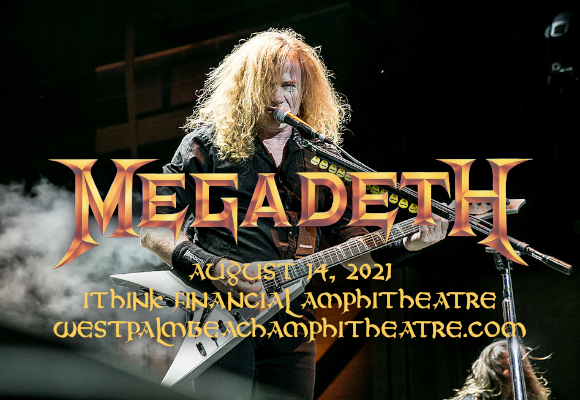 Few bands are as essential to evolution of heavy metal as Megadeth – one of the "big four" of American thrash metal alongside Metallica, Anthrax and Slayer, the band's revolutionary style of playing influenced a legion of subsequent groups and set the groundwork for the genre as a whole. Formed by frontman Dave Mustaine in 1983, after his departure from Metallica, their seminal album Countdown to Destruction (1992) launched their best-known singles ("Symphony of Destruction", "Sweating Bullets", and "Skin o' My Teeth" ), eventually achieving triple platinum status and gaining the respect of fans and critics alike as an essential album in the heavy metal canon. Throughout the group's career, 11 of Megadeth's 15 studio albums have reached the top 20 of the Billboard 200 (with three of them hitting the top five), and five of them have been certified platinum or above. The band has also received 12 Grammy Award nominations, winning its first in 2017 – taking home the Grammy Award for Best Metal Performance for the song "Dystopia."